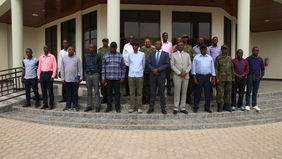 On Monday 29th July 2019, at ILPD headquarters, there was a provisional handover of the ILPD building constructed by Reserve Force through the tri-partite contract signed between ILPD, Ministry of Defense and Rwanda Housing Authority.

Whereas the 1st phase of this building was constructed with the support from the Development Partners (BTC), the 2nd Phase has been fully financed by the Government of Rwanda through the Ministry of Finance and Economic Planning.

This 2nd phase of the building was constructed by the Reserve Force – Ministry of Defense and was supervised by TECOS Ltd.  The building is 4 storied and is fully equipped with modern facilities like air conditioning and security cameras at all levels. The building consists of classrooms, cafeteria, computer lab, and sixty rooms including executive rooms, Rector’s office and the main reception area.

Maj. Nkusi Bwanakeye, acting Head of Construction RDF/RF, on behalf of the contractor thanked all that were involved for the wonderful partnership and collaboration during the construction phase and requested for a proper management of this building so that it may keep as it is handed over.

With thankful words for the work done up to the completion of this building, Dr. Kayihura M Didas, the Rector of ILPD said that: “This is the day we were eagerly waiting for, given the long and the difficult journey we trod with the first contractor before the Reserve Force took over.” He assured the Reserve Force that the building shall be well managed under their guidance as was given during the technical handover.

The first contractor started on the construction project in May 2016 and resigned from work in March 2018, which led to the Reserve Force taking over in May 2018. The building costed ILPD three billion seventy seven million nine hundred and twelve thousand six hundred and forty two Rwandan francs (3,077,912,642Frw) to the completion.