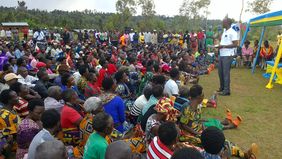 Justice Reconciliation, Law and Order Sector (JRLOS) has organized a Justice Week from 18th to 22nd March 2019. The justice week was implemented in partnership with all public Institutions affiliated to the Ministry of Justice, as well as private institutions including the Civil Society Organizations (CSOs) and development partners that support the Justice sector in one way or the other.

On Day two (19th March) the Rector of ILPD Dr. Kayihura Muganga Didas was the head of delegation to Nyamasheke District, Nyabitekeri sector, Kigabiro cell where he gave a public talk on the Justice Sector and its composants and later, on the nature of emerging crimes and the way to prevent them. The talk was given to a crowd of about 700 people, residents of Nyabitekeri Sector. After the presentation, residents were given the floor to share their views and to ask relevant questions relating to the theme of the week, of which some were resolved right away, and others were referred to the District administration for consideration and resolution.

He continued the awareness campaign to the University of Rwanda’s Huye Campus on 20th March 2019 where with many other officials, he explained to students and staff about Justice Sector and coordinated the talk on emerging crimes, corruptions and cyber-crimes. He also attended the same talk at Nyanza prison on 21st March 2019.

The justice week aimed at ensuring that the public has sufficient and accurate information about Justice Reconciliation, Law and Order Sector, but also on emerging crimes like Cyber Crimes, Human trafficking, Child abuse, Drug abuse, Gender Based Violence, Corruption and others.